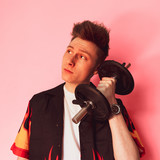 A.R.T (Arthur Divoy by his real name) is a 21 year-old Belgian Dj and Producer. Despite his young age, he is already showing some great performances, such as an award at the Octave de la Musique in 2020, a place on the Tomorrowland line up, and shows all over Belgium. A.R.T got noticed by the general public by releasing his first single "You'll Be Mine" which raised several months in the Belgian charts, and got played on several national and international radios.