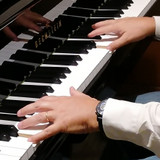 Gianluca Podio ranges over a vast number of musical genres which give him the ability of having a constant and direct contact with the public. This contact allows him to translate into music all the sensations that the public or audience itself and his life’s experiences give him on a daily basis.Gianluca Podio composes symphonic, operatic and chamber music and regularly performs in important institutions such as the Carnegie Hall in New York, the Gasteig in Munich and the Roy Thompson Hall in Toronto.Strengthened by his experience he is in fact extremely active in the field of music applied to image where he has professionally developed in contact with leading personalities such as Ennio Morricone with whom he worked as a keyboardist and pianist from 1985 until 1997. . He wrote many songs with the important italian singers like Pino Daniele,Renato Zero and others.He works with Pino Daniele also as arranger,conductor,pianist and keyboardist from 1997 until 2014. <br>