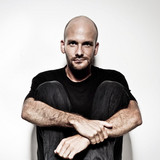 Bottin (1977) is an artist, producer and sound designer based in Venice, Italy. Before moving to the forefront of the contemporary electronic scene with seminal releases on record labels such as Italians Do It Better, Eskimo and Bear Funk he has worked as producer, arranger and remixer for major Italian and international artists (such as Lucio Dalla, Rettore, Chambao). Bottin has toured in more than 30 countries, from Americas to Australia, from Europe to Asia, from contemporary art galleries and underground parties to major clubs like Space and Pacha in Ibiza. He curated and performed in various music events for Biennale di Venezia. Bottin’s dj sets are eclectic, unpredictable journeys into space disco, dark tribal house and rare gems from the past, all reworked for the modern audience. A reckless blend of retro-futuristic sounds and contemporary electronica that always sets the dance floor on fire. Side-projects include neo italo disco band Cristalli Liquidi and electronic percussion act Deardrums – http://www.bottin.it