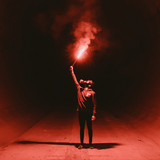 From the neon wasteland of Las Vegas, NV, CODE RED RIOT was spontaneously formed in 2017 by Corky Gainsford, after posting an early demo of "Living Low" on Facebook and getting spun on Sirius/XM Octane laster that same week.