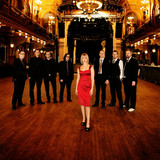 The Quiet Nights Orchestra hailing from Stockholm, Sweden, released their debut album “Chapter One” all over the world in 2009 and it has not left anyone indifferent. The album proved above all that jazz is not an outdated genre and definitely not exclusive to jazz clubs alone. The band has always tried to find new ways of expression in their music but still glimpses back to classic jazz, maintaining the roots and pushing the envelope at the same time. This sounds clearly in their sequel, and instead of stomping in the same footsteps as their debut album, they developed their sound in the album Movin’! This timme, more band members moved into the composer room, which also demonstrates that the band is not a one man show!   The post-production of the album has also played a central role in the recording process this time, adding elements such as strings, vibraphone and guitar as extra ingredients. Eminent guests such as the world-famous musician and arranger Magnus Lindgren and musician Roman Andrén gives the album extra spice!   The sound on the album could be described as modern but with the same elegance as Jazz from the 50s and 60s. The compositions sparkle with fresh influences from genres such as soul, funk, house and even some hints of boogie, surf and classic cuban rumba.   One thing is certain; that the band does not tread in the same footprint as before, but is movin’ forward with a fiery enthusiasm!