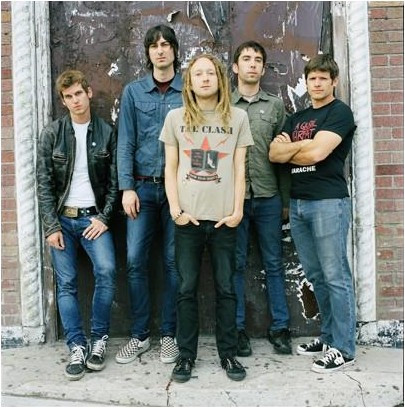 An anthemic punk rock band from Richmond, Virginia, Strike Anywhere emerged in the early 2000s with a staunchly political and activism-minded approach to hardcore and punk traditionalism, drawing comparisons in both sound and vision to such stalwart acts as Avail and 7 Seconds. They gained popularity after their music appeared in multiple iterations of the popular Tony Hawk skateboard video games, resulting in strong sales of the studio LPs Exit English (2003) and Dead FM (2006). Despite a dearth of recordings in the 2010s, the group maintained an exhaustive tour regimen, playing both at home and abroad. In 2020, they issued their first collection of new music in 11 years, an EP titled Nightmares of the West. Strike Anywhere was founded in 1999 by vocalist Thomas Barnett (ex-Inquisition), guitarists Matt Smith and Matt Sherwood, bassist Garth Petrie (ex-Count Me Out), and drummer Eric Kane. After an initial EP, Chorus of One, Strike Anywhere (named such after an old Inquisition song) joined up with Jade Tree, which issued Change Is a Sound in August 2001. Exit English followed in 2003, and the rarities collection To Live in Discontent in January 2005. The band hooked up with Fat Wreck Chords for their next full-length, the acclaimed Dead FM, released in June 2006. National and international tours followed through the next year -- Sherwood amicably parted ways with the group in March 2007 -- and continued on into the next decade. In 2020, Strike Anywhere released the EP Nightmares of the West, which was issued by Pure Noise Records. ~ James Christopher Monger & Mario Mesquita Borges., Rovi