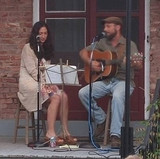 The Acoustic Medicine Show was started by a singer/songwriter Joe Tobin in 2010. He formed a group in the Hudson Valley upstate New York that was influenced by the simple life of country living , using bluegrass instrumentation and harmonies, blending with jazz, folk, and blues. Their music falls into their own mountainfolkgrass genre. He has written and recorded 6 albums with various local band members. Currently working on a new album to be released end of year with 15 brand new original songs.