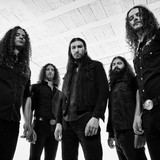 Dead City Ruins are 5 young men from Melbourne, Australia who play Rock ‘n’ Roll like their lives depend on it. Formed in 2010 by five of the finest musical wingmen in the state of Victoria, the band drew first blood by launching headfirst into the studio to lay down ‘Midnight Killer’ Their debut released in early 2011. Side stepping the notion of settling down and becoming another ‘local band’, Dead City Ruins began their global manifesto in earnest, booking just 4 x shows and 5 one way tickets to Europe before even releasing the album in Australia. The band toured for the better part of 2 years, defiantly keeping a run down van on life support while living in tents, roadside shelters and floors of those who would fall for their many charms. This perpetual touring cycle found them landing support spots and building up to their own headlining shows and festivals. No sooner had they finished a new album, they found themselves thrust back into the maelstrom of touring as the handpicked opening act for Skid Row & Ugly Kid Joe filling out the rest 2013 through to early 2014. The run concluded in AUS with a rapturous homecoming and kicked off subsequent headlining tours of SE Asia and UK/EU which left the band armed with a rabid fan-base and a clear mission to record their latest album "Never Say Die."