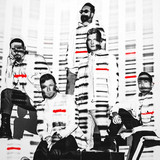 For 25 years the Backstreet Boys, one of the most successful groups in music history, has delivered the finest pop music one has to offer, making them one of pop’s most influential performers. With countless #1s, record-setting tours, numerous awards and worldwide sales in excess of 130 million, BSB has been recognized as the best-selling boy band in history. On January 25th, 2019 BSB released their new 10th studio album “DNA” on RCA Records. The album features the 2019 GRAMMY nominated Top 10 hit