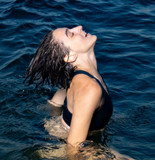 Erika Lundahl is a heart-forward songwriter for resilient hearts and resonant bodies. Based on Duwamish land in Seattle, Erika’s folk medicine roots in personal and collective histories of resilience, dancing between shadow and light to seek futures of abundance, possibility and healing. She is an artist on Patreon at www.patreon.com/erikalundahl and her new album “Daughter, You’re a Storyteller” is out October 30th.   Originally from the Willamette Valley of Oregon, Erika began to perform in earnest in upstate New York in 2012 with her band Animals of Grace. She returned to the tall trees and rugged wilderness of the Pacific Northwest in late 2013. Her band's debut album “Songs of Shattering,” released in 2015 on Rolling Crone Records was inspired by the poetry of Edna St. Millay and made it's debut onto CMJ's top 200 albums of college radio in March 2016.