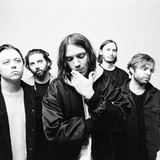 Shade’s shadowy and razor-sharp six-string raucousness is an all-consuming beast, bruising with a dark and doomy swagger one moment, and pushing skywards with hazy, transcendental trips the next. Hailing from Hamilton, ON the band takes the most vital parts of the music they grew up on—Brit rock’s ambitious sneer, neo-psychedelia’s mind-melting hooks, and grunge’s punk-infused heaviness—and turbocharges them, building an assault of sound that can shake the foundations of a stadium just as readily as it razes a grimy dive bar. It pulls from the storied halls of rock ‘n’ roll Valhalla while injecting a much-needed dose of 21st-century verve, like a Frankenstein’s monster stitched together by wild riffs, fists-raised riots, and evil energy.