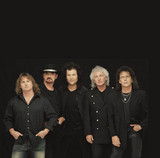 They hit number three in the U.K. with "If You Think You Know How to Love Me” and "Don't Play Your Rock 'n' Roll to Me”. In 1976, the group had three Top 20 hits, including the number five "Living Next Door to Alice." Smokie hit number five both in 1977 ("It's Your Life") and 1978 ("Oh Carol"). They disbanded in 1982 and reformed briefly in 1986, but Chris Normans solo career was taking off in Germany as well, so he could no longer sustain his commitment to the band, however Chris offered a solution and introduced the rest of band to his friend Alan Barton. The new Smokie was now born and Alan firmly established the new line-up going from strength to strength until tragedy struck in 1995 and robbed them of Alan Barton in a freak car accident. The band was devastated but it was decided that they would continue. A friend of the band Mike Craft was invited to audition for the band and after only one song Smokie knew that they found their new front man. Smokie went on to release successful albums like “The World and Elsewhere” and “Wild Horses” and the new millennium brought even more success with their big selling albums “Uncovered” and “Uncovered Too”. Smokie is today after more than 40 years still going strong and their touring calendar is filled as their fans flock to see them live throughout Scandinavia, Europe, South Africa & Australia.