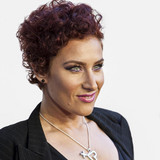 Two time Juno-nominated and widely considered one of Canada’s foremost Hip Hop lyricists, Eternia continues to knock down barriers and trail-blaze across the globe for Canadian Hip-Hop music. Eternia has toured extensively in Canada, the United States, Mexico, Australia, & Europe; those that are lucky enough to catch her on stage credit her as one of the best live performers they have witnessed. In 2010, Eternia released her 5th full-length recording on Fat Beats Records with producer MoSS. The Juno-nominated “AT LAST” (her second Juno nod) was met with critical acclaim, featured guest appearances by some of Hip Hop’s elite, was long-listed for a Polaris Prize and was named one of the Top 25 Albums of 2010 by DJ Premier. Since “AT LAST” Eternia has solidified her standing with a slew of buzz-worthy collaborations, music videos, and singles. Eternia also exercises her passion for the arts by mentoring youth, applying her seasoned expertise as an Ontario Arts Council and FACTOR jury member, lending her voice to a variety of issues including mental health, gender equality and Canadian Hip Hop History in public speaking engagements, producing a podcast “The Messengers” that offers a glimpse into the artistic process with special guests for the youth-based Love Is Moving publication, and shines on camera in her role as co-host of the nationwide television show “Love Is Moving” and guest television host for “Context With Lorna Deuck.”