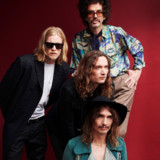 Overblown with pomp and camp, English rock band the Darkness crashed the mainstream in the early 2000s, resurrecting classic rock & roll bombast and excess with their breakthrough debut, 2003's Permission to Land. Scoring armfuls of awards and chart records, the outfit imploded just as abruptly as they seemed to arrive, breaking up after lackluster sophomore release One Way Ticket to Hell...And Back. New bands were formed, rehab was completed, and old wounds were healed in the years that followed. The band reunited in 2011 and issued their comeback, Hot Cakes, in 2012. Subsequent 2010s efforts expanded their reliably raucous and nostalgia-indebted hard rock catalog, capturing fans with their theatrical live shows and devotion to excess and tongue-in-cheek humor. In 2019, they released their sixth full-length, Easter Is Cancelled. Centered around irrepressible frontman Justin Hawkins (vocals/guitars/keyboards), who, along with his guitar-playing baby brother Dan, bassist Frankie Poullain, and drummer Ed Graham, single-handedly resurrected the rather unfashionable sounds and attitudes of late-'70s hard rock for an unsuspecting generation. Following the demise of an earlier, conspicuously synth pop-based outfit named Empire, the Hawkins brothers sowed the seeds of what would become the Darkness at an impromptu karaoke session on New Year's Eve 1999. Justin's rapturous rendition of Queen's "Bohemian Rhapsody" showed them the way, and the suitably dramatic name "the Darkness" was chosen shortly after the arrival of Poullain and Graham. With outrageous stage antics that included gaudy leotards stolen from Steven Tyler's wardrobe, leaps and splits borrowed from David Lee Roth, and an ear-piercing falsetto copped from Freddie Mercury himself, the multi-talented elder Hawkins led the quartet as the group spent the next two years slogging it out on London's pub circuit. Though they were immediately singled out as a joke by the notoriously vicious British press, the Darkness' high-energy sets, remarkably catchy material, and unapologetic worship of old-school rock & roll bombast gradually earned them a fanatical following based on simple word of mouth. The tide finally began to shift in their favor in August 2002, when they released their debut EP, I Believe in a Thing Called Love (through the independent label Must Destroy Music), won a major talent contest, and scored all-important opening slots with Deep Purple and Def Leppard. Their momentum carried them into the new year, starting with a knockout performance at Austin's SXSW in January, and continuing with the release of the "Keep Your Hands Off My Woman" single in February (which peaked at number 36 on the U.K. chart), and climaxing with their subsequent signing with major-label Atlantic in March. Nothing could stop the Darkness' snowball effect, and a series of acclaimed festival appearances set the stage for their debut album, Permission to Land, to debut atop the British charts -- the first time a new act had achieved such a feat since Coldplay three years earlier. Aside from the 2003 Christmas single "Christmas Time (Don't Let the Bells End)," the Darkness concentrated on touring until 2005, when they returned to the studio with Cars and Foreigner producer Roy Thomas Baker. During the recording of their sophomore album, the band parted ways with Poullain and replaced him with former guitar tech Richie Edwards. One Way Ticket to Hell...And Back was released late in 2005 but didn't fare as well as its predecessor, which took a toll on Justin Hawkins. Following several months of touring, the frontman entered rehab in August 2006 for alcohol and cocaine abuse. Although he completed the program, Hawkins nevertheless left the Darkness' lineup later that year, leaving the group's fate in the hands of his former bandmates. The remaining musicians regrouped under the name Stone Gods the following year, while Justin busied himself with solo work, issuing a single under the moniker British Whale and a full-length album, 2008's Red Light Fever, with his new band Hot Leg. In 2011, the Darkness reunited with the original lineup featuring Hawkins and embarked on several European tours. In 2012, they delivered the full-length Hot Cakes. In 2015, the band issued their fourth studio outing, Last of Our Kind, the first Darkness effort to feature new drummer Emily Dolan Davies, who'd replaced founding member Ed Graham the year before. However, just before the album was released, Davies departed the band, with Rufus Taylor stepping in as her replacement for the subsequent tour. Taylor, the son of Queen's Roger Taylor, made his recorded debut on their fifth studio album, 2017's Pinewood Smile, released via Cooking Vinyl. After touring with American supergroup Hollywood Vampires, the band released their first live album, Live at Hammersmith, recorded at the Eventim Apollo in late 2017. This was followed in 2019 by the band's sixth LP, Easter Is Cancelled, its provocative artwork depicting the group as alternate-universe-based biblical figures. ~ Eduardo Rivadavia, Rovi