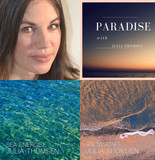 Julia Thomsen is a classical composer. Her family have always been musical, especially her father, and music was always played at home while growing up. Recently Julia reached over 1 million on Spotify streams and has been placed on thousands of independent playlists, including the very popular Focus Music Work-Study and Concentration, Reading Music, Movie Soundtracks and Cinematic Music. In February 2020, Julia signed to international publisher Delimusic in London. Inspired by nature and the world around her, Julia Thomsen's music is delicate, organic and beautiful. It has been heard on BBC Radio 4, Scala Radio, Switch Radio, Actual Radio and One World Music plus many more. Julia was more inspired than ever to produce infinite pieces of music while under lockdown. Moreover, her extremely popular and uplifting EP 'Sea Energise' was published in August 2020 to rave reviews and national radio play, including Scala Radio Uk with Angelica Bell. "Utter beauty and transcendent happiness" Julia Thomsen's latest EP, 'Paradise,'

was released in April of this year and has already received countless reviews and radio play. She placed third in the oneness award for her classical Christmas orchestral song 'New Beginnings' with one world music radio in December 2020. Julia will release a collaboration single with Indian producer and composer TRE called 'Barcelona Summer' on August 6th. Julia is also collaborating with Jason Cadden on remixes of some of her most well-known songs.