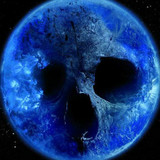 Intense, diverse, unpredictable - when it comes to defining AEONS CONFER's musical endeavours, one will be most quickly stretched to one's limits of comprehension. What started as the brainchild of brothers Simon and Nils Wrobel eventually in 1997 in Hamburg, Germany, with one ferocious and black metal-soaked song called "Fallacy Of Faith" revering the then genre-defining Emperor, has evolved into a gigantic musical monster with their current album ZERO ELYSIUM in 2019, running rampant through genres like technical death metal, extreme metal, and even djent and symphonic metal, without stipulating one single genre definition. Preceeding ZERO ELYSIUM, the dystopian concept album SYMPHONIES OF SATURNUS put AEONS CONFER on the map of the world in 2013 with one single stroke as a force in extreme metal to be reckoned with. The album manhandled the band on huge festivals like Summer Breeze (GER), Metal Days Slovenia or Tuska in Finnland, sharing stages with acts like Ensiferum, Abbath, Lamb of God, Fear Factory, In Flames, Devin Townsend, Cannibal Corpse, Arch Enemy, Sepultura and many more. Now, ZERO ELYSIUM will open up new perspectives, not only for the band but also for the listener. ZERO ELYIUM will add a new dimension to extreme metal, so be aware of this juggernaut of a record, which is now available on CD, LP and via all common digital vendors like iTunes, Google Play, Bandcamp or Amazon.