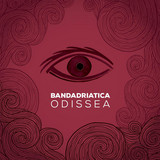 On September 28 2020, Bandadriatica releases the new video clip of the song Odissea, title track of the latest album. The piece has two special guests, Antonio Castrignanò and Redi Hasa who, together with the band, tell of the odyssey of a migrant. In the text, in fact, the figure of Ulysses is poetically transformed into a Nobody of our time, exalting the indifference that the world often reserves for the affairs of immigrant peoples. In the video, the protagonist Hassane Niang moves in a desert world (the images were shot in January), in the empty spaces that only a few days later would have redesigned our cities. For the first time, BandAdriatica deals directly with the theme of immigration, a theme that has always been the background to border music, to migrant music, of which the band has become the protagonist in recent years.