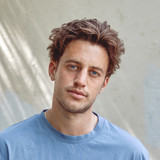 Stevie Appleton combines a duel love of singer-songwriters with the production value of dance to mine his own brand on pop music. The London based artist is a musician in the truest sense. An accomplished pianist from the age of six and talks passionately of a love of travel that’s seen him perform with salsa bands in Cuba, classical musicians on the Amalfi Coast of Italy and a hip hop group in Colombia. “Playing around the world like that has given me a chance to explore some of the genres that might be too much for a record. I started as a live musician and performing reminds me why this is the only job I ever want.”    After graduating from music college in London, he was quickly signed by Spinnin’ Record’s based in The Netherlands, and recognised as one of their key writers. During his time there, the label recognised his vocal and performing ability and, with Warner Music Group, released his debut single “Supposed To Do”. Stevie has since become a platinum-selling writer with artists including Tiesto, Cher Lloyd, Klingande and Filatov & Karas, with Number 1's in Russia, Poland, Singapore. In December 2019, Appleton co-wrote and was the featured artist on the Tiesto single “BLUE”.