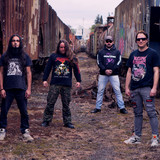 The story of Juggernaut began in 2005, at Blumenau city in Santa Catarina state, south of Brazil. Célio Jr decided to leave the thrash metal band Rhestus and dedicated himself to the new project. The band's proposal was to play a Thrash Metal (with influences of Death, Sadus and Destruction), but not in a traditional way, bringing elements of Rock and Progressive metal like Marillion, Rush and Dream Theater. In October 2005 the band releases their first studio record, the CD demo “Juggernaut”. This demo had excellent critics from many specialized media. In November 2006, the first full-length album was released, they called “Lines of the Edge”. With 10 tracks, the first CD had great critics and opened the door for the band to perform their first tour called “Thrashing on the Edge Tour”. In 2011, after a pause to compose, the band decided to start a new album. Called “Ground Zero Conflict”, the new full-length included 7 songs, more technical and more professional. In 2020 the band decided to record their third album, entitled “La bestia”. A more “democratic” record in their compositions with influences of all the members, and with the most refined technical level ever had. The year is 2020, with the arrival of the infamous pandemic of COVID-19, the band has a time to enter the studio to record the new album, "La Bestia". “La Bestia” was released in digital format on January 10, 2021, and is available on all platforms.