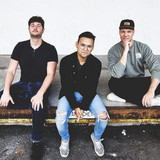 Rewind Rewind began as the solo bedroom project of Sergio Gosewisch. After recording a few songs in his "bedroom studio", Rewind Rewind's first single "Insanity" began spreading on SoundCloud in a very positive way, that he decided to put together a three-piece band for his project with Tim André Trachte on the drums, and guitarist Max Vahs. The band is heavily influenced by post-punk, and indie rock music. Their DIY debut album was mostly recorded in Sergio's apartment and Tim's basement, and was released on July 31st 2020. The album contains songs that are diverse in mood and style, but most use a minimalist punk approach combined with unorthodox structures and dreamy guitar effects. Rewind Rewind is currently working on new material and will release new music soon.