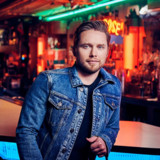 Jameson Rodgers likes to say he just knows when a song feels right for him, whether he wrote it or not. "Some Girls," the Batesville, Mississippi native's debut single under Sony Music Nashville, is one of those songs — a hard-edged tune penned by Michael Hardy, Jake Mitchell and C.J. Solar that existed in demo form for years before Rodgers got to take a crack at it. Following the countless open mic nights of his early days in town, Rodgers eventually signed his first publishing deal with Combustion Music. There he focused on developing his songwriting voice, landing his first cut on Florida Georgia Line's Dig Your Roots album, with "Wish You Were On It." In the meantime, he also released his self-titled EP. He followed that with a second EP, which was released independently in 2018. That dedication has brought Rodgers a whole truckload of new success in 2019. He helped pen the song "Talk You Out of It," which Florida Georgia Line released as the second single from their latest album Can't Say I Ain't Country, as well as Chris Lane’s recent single “I Don’t Know About You.” He was chosen to participate in CMA's inaugural KixStart Artist Scholarship program, which afforded Rodgers the opportunity to perform on the Nissan Stadium stage during CMA Fest and a year of mentorship and support. And to top it off, he signed his new record deal, through a partnership with River House Artists and Columbia Nashville.