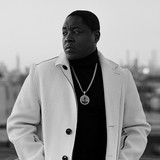 Known for his distinctively gravelly voice and unflinching hardcore rhymes, Jadakiss established himself with Bad Boy and Ruff Ryders affiliates the LOX before he made further strides as a solo artist with Ruff Ryders and Def Jam. He started a streak of Top Ten solo albums with Kiss tha Game Goodbye (2001) and continued it with the chart-topping Kiss of Death (2004) (featuring the controversial, Grammy-nominated "Why?"), both of which were certified gold by the RIAA. His releases since then include Top 5 Dead or Alive (2015), the Fabolous collaboration Friday on Elm Street (2017), and Ignatius (2020).

Born Jason Phillips in Yonkers, New York, Jadakiss got his start as a teenage freestyle rapper before joining Sheek Louch and Styles P to form the Warlocks crew, eventually known as the LOX. The trio hit the Top Ten with their first two albums, Money, Power & Respect (1998) and We Are the Streets (2000), released respectively on Bad Boy and Ruff Ryders. Jadakiss then went solo with Kiss tha Game Goodbye. Issued through Ruff Ryders in 2001, it entered the Billboard 200 at number five, highlighted by "We Gonna Make It" (featuring Styles P), Jadakiss' first headlining Top Ten hit on the Billboard rap chart. Three years later, the MC topped the Billboard 200 with Kiss of Death, an album that featured two more Top Ten rap hits with "Why?" (with Anthony Hamilton) and "U Make Me Wanna" (featuring Mariah Carey). Banned by some radio stations and scrutinized by at least one high-profile political commentator for the line "Why did Bush knock down the towers?," "Why?" was nonetheless nominated for a Grammy in the category of Best Rap/Sung Collaboration. In 2007, Jadakiss made another move, this time to Jay-Z's Roc-A-Fella Records -- through Def Jam -- where he closed out his "kiss" trilogy with Last Kiss. The album, his third straight Top Ten hit, featured guests such as Ne-Yo, Faith Evans, and Swizz Beatz (all on the charting singles), along with the likes of Mary J. Blige, Nas, and Pharrell Williams. After releasing the 2011 commercial mixtape I Love You (A Dedication to My Fans), Jadakiss dropped "Big Boy Dialogue," which was slated as the lead single from his first true album of the 2010s. However, that effort -- Top 5 Dead or Alive -- wasn't released until 2015, but did just that, debuting at number four on the Billboard 200. A third proper LOX LP, Filthy America...It's Beautiful, arrived in 2016. The following year, Jadakiss teamed up with Fabolous for the collaborative album Friday on Elm Street. Inspired by horror icons Freddy and Jason, the set peaked in the Top Ten and featured guests like Future, Swizz Beatz, and French Montana. Still with Def Jam, Jadakiss released his fifth proper solo full-length, Ignatius, in 2020. The album was titled in tribute to his longtime friend and manager, Ignatius Jackson (aka Icepick Jackson), who died from cancer. ~ Neil Z. Yeung & Andy Kellman, Rovi