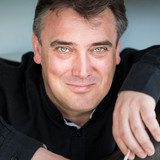 He has been Artistic Director and Principal Conductor of Gävle Symphony Orchestra since 2013, and his time there has brought the orchestra a new level of international recognition through highly acclaimed recordings and touring performances. Having spent many years as a highly regarded flautist, working with the most inspiring conductors of our time, Jaime turned to conducting full-time in 2013 and has become very quickly sought after at the highest level.