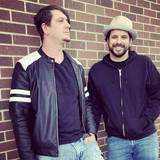 Broken Transmitter is Scott Paris and Tim Benner. The two met in 2011 at a music store, and became fast friends. Paris hired Benner into the Assorted Vagabonds, which was the backing band for his solo sct, shortly after. Benner, an accomplished studio engineer, played Bass and Drums in the AV at different times. The two joined a band called Hello Dollie in 2013. Present day, Broken Transmitter has just finished a debut album, with both Paris and Benner as producers and main performing musicians. The full length called, "Meridians," was released in March 2019. Tim and Scott also serve as part-time members of the Thomas Nicholas Band. BT met Thom while on tour with the Wizard World Comic Con.