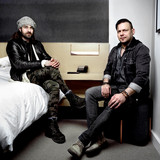 Canadian bilingual folk rock acoustic duo. Their performance is intimate, emotive and provoking. Formed in 2016, the Canadian duo have toured a good part of the country and shared the stage with notable acts such as: Dan Mangan, The Trews, Julian Taylor Band, to name a few. With national air play on CBC, their single “Gone” lay the framework for their career. “Angelique”, another song on their debut album, is currently on rotation on Ottawa’s information line 3-1-1. They’re currently writing their second album, with future tour dates to be announced in the new year.