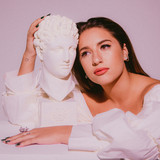 Kenzie has become one of the most influential rising stars of Generation Z.   At just 16 years old, Kenzie has made a splash in the entertainment industry. She has garnered a massive social media presence of over 30 million followers across several platforms, and her music videos have collectively received over 200 million views.   Kenzie released her debut album, Mack Z, in 2014, which soared to No. 1 on the iTunes pop chart list and No. 7 on the overall album charts; her music video for the song “It’s A Girl Party” reached No. 1 in the US, UK and Australia. She went on to record and star in Todrick Hall’s “Freaks Like Me” and later recorded “Day & Night” with Johnny Orlando. In 2017, Kenzie released the single “Monsters (aka Haters),” which was a trending track on YouTube’s top 15 and featured on Sirius XM1 Hits. She followed this success with her singles “Teamwork,” “Breathe” and “What If.”   In November 2018, Kenzie released her album Phases, which exemplified her growth as both a singer and songwriter. This growth can be heard on tracks such as “Nothing On Us,” “Emoceans” and “Wonderful,” which was written by Grammy-winning singer/songwriter Sia. 2019 brings more exciting adventures for Kenzie, as she signed with Arista Records, released a new single "HOT" and supported PRETTYMUCH on their North American “FOMO” Tour.