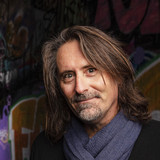 The band won an ARIA and Greg was named Australian Songwriter of the Year by APRA in 1993. He is also a producer, academic and published author. Across a thirty year recording career he has established a catalogue of melodic, harmonically rich and lyrically meaningful folk rock and "horse power pop". His new album Against the Wheel,