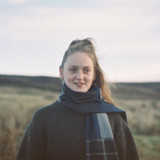 Amy May Ellis grew up in the middle of the North York Moors and the start of her musical career saw her guesting for artists such as Micheal Chapman, Alessi's Ark, Hiss Golden Messenger, Tiny Ruins, Ryley Walker, and Willy Mason. By the age of 16, Amy moved to York and quickly established a reputation for her captivating and moving performances. Soon after, her debut EP Weathered By Waves was recorded in 2017 with a local group of talented friends and musicians. This impressive EP has since received support from the likes of BBC Introducing, BBC 6 Music, and Rough Trade. We Got Fire, Amy's second release was written while she was living in London and recorded in a Farmhouse in North Yorkshire. This five-track EP fuelled a headline tour around the UK and Ireland throughout May 2019 including a debut appearance at Brighton’s key tastemaker festival The Great Escape. In November 2019 Amy released her third EP, Where My Garden Lies, a small collection of solo songs exploring ideas of home. Having honed her craft during 2020’s lockdowns, Amy May Ellis finally returns with a collection of songs that seek stillness in turbulent times.