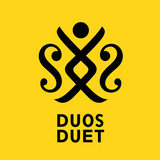 Duos is a violin and cello duet. Golsana Shenasaei is the cello player and Niki Yaghmaee plays the violin and rhythms (electronics-violin percussion). They started their duet performances as street musicians in Tehran. As they were growing they started performing in various events in Iran, Europe, Turkey and Georgia since 2017 onward. "Pieces from streets" is the debut release by the musical duo Duos Duet containing five tracks which originally conceived from improvisations during street performances sessions of artists.