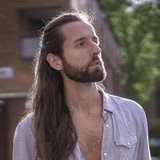 British based Italian artist Valerio Lysander has performed in the UK, France, Scotland, the Netherlands, Hungary and Italy with his pop/folk songs influenced by the opera voices and classical arrangements, with quirky, original, heartfelt and honest lyrics, his songwriting looks at the world with optimism and a full emotional spectrum. In 2016 he was among the 10 nominees for Best Male in the Best of British Unsigned Awards and Ryan, new single released in the same year, was broadcasted by BBC Introducing. In 2017 he was among the finalists of the Coffee Music Project and Pride’s Got Talent, and performed in Trafalgar Square for Pride in London and on the main stage of Manchester Pride. His latest single, If You Were Me You Would Be, a song about the hardship of being a musician in modern society, was broadcast on BBC6 by Tom Robinson. His latest album, “We Are Like Coloured Moths Towards The Sunlight”, was released on 21st July 2018.