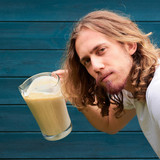 An emerging British/Brazilian music artist from the UK with warm vocals, silky guitar tones and a breezy summer atmosphere, Jrod is a singer songwriter, Jordan Rodrigues. Jrod began to upload covers and small videos of himself playing guitar to YouTube, Facebook and Instagram with his phone camera. As he developed his sound he began making energetic, yet smooth guitar tracks which form the basis of his evolving sound. Jrod started his music career with his debut single Chocolate Cake; a somewhat satirical song about a man who falls in love with a chocolate cake only to find out the cake is unfaithful to him, so he eats it. The song was born from a collaboration with KJ where it was written, produced and filmed across 2 days with a budget of 20 pounds.