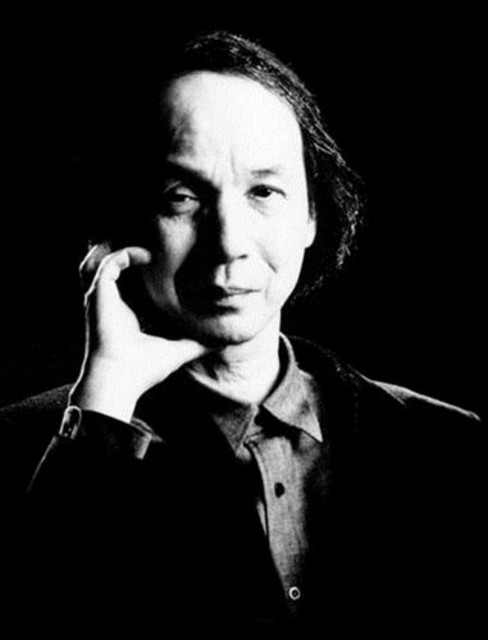 Toru Takemitsu (1931-1996) was a self-taught Japanese composer who combined elements of Eastern and Western music and philosophy to create a unique sound world. Some of his early influences were the sonorities of Debussy, and Messiaen's use of nature imagery and modal scales. There is a certain influence of Webern in Takemitsu's use of silence, and Cage in his compositional philosophy, but his overall style is uniquely his own. Takemitsu believed in music as a means of ordering or contextualizing everyday sound in order to make it meaningful or comprehensible. His philosophy of "sound as life" lay behind his incorporation of natural sounds, as well as his desire to juxtapose and reconcile opposing elements such as Orient and Occident, sound and silence, and tradition and innovation. From the beginning, Takemitsu wrote highly experimental music involving improvisation, graphic notation, unusual combinations of instruments and recorded sounds. The result is music of great beauty and originality. It is usually slowly paced and quiet, but also capable of great intensity. The variety, quantity and consistency of Takemitsu's output are remarkable considering that he never worked within any kind of conventional framework or genre. In addition to the several hundred independent works of music, he scored over ninety films and published twenty books. Takemitsu had no important teachers, and his musical career really began with the formation of the Jikken Kobo (Experimental Workshop) to promote and perform mixed-media art works. It was Stravinsky's acclaim of the Requiem for strings in 1959 that launched Takemitsu's international career. The next few years produced a wide variety of works including Takemitsu's prolific film work, and numerous new music concerts and festivals that culminated in 1967 with a commission for the 125th anniversary of the New York Philharmonic. By this time, Takemitsu had begun using traditional Japanese instruments in his music. November Steps is one of his most successful combinations of Eastern and Western music; Takemitsu's style was created from, and rooted in both. Takemitsu's international fame skyrocketed after this premiere, flooding him with commissions and honors that established him as one of the most influential Japanese composers of the century.