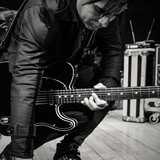 Alerta Rocket emerged in 2008 with a slew of Top10 songs (Beiby, Dame Mil & Dulce Invierno) in MTV and radio stations from their self-named debut album. They are based in Lima - Peru and have been touring and performing in different countries like Peru, Argentina & Uruguay. After several years, the band released their second album ‘Indie Rocks’. ‘Lo Sientes’, ‘Mienteme’ & ‘Love’ are some of the songs you will rock. The band has released a the new album ‘Lado A’. Alerta Rocket Latin Grammy Nominee 2020: Best Recording Package Follow Alerta Rocket in social media and website (www.alertarocket.com).