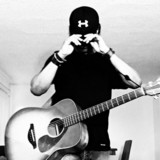 Maverick Hill, is from Los Angeles, and is still learning & evolving as an Artist. Musical influences: Jimi Hendrix, Jeff Buckley, Prince, U2, 2Pac, NIN, Led Zeppelin, Pearl Jam, Lenny Kravitz. Maverick strongly believes each song should have its own identity & sound. He gained a reputation as a great dancer in the LA club scene. He became a popular Event Coordinator & Nightclub Promoter. During this time, he met Prince and the two became friends. He was the Promotions Manager at Prince's "Glam Slam" Nightclub. "His music is in a lane all its own when it comes to sound. Which in the entertainment industry is a sign of greatness." – Afro Punk Magazine "It is rare for musicians to be as daring and experimental as Maverick Hill." – Jamsphere Magazine "Maverick Hill sticks to what he does best. And that is writing outlandish songs that coalesce all genres into fun, blurring music. His tracks could be music for a party, for reading, for crying, for screaming, for laughing, you name it." - Soundlooks Magazine As an Independent Music Artist, Maverick prefers the creative control, and freedom to record & release on his own schedule. He loves experimenting with traditional instruments and creating new sounds through the latest DAWs. He knows what it takes to get you on the Dance Floor and his music delivers a reason to stay there.