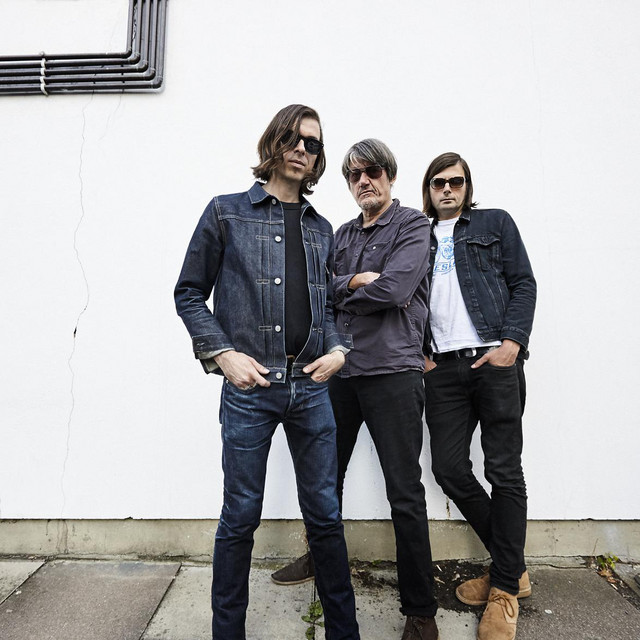 Little Barrie are a London-based trio led by ace guitarist Barrie Cadogan, whose sound is an exciting blend of hard rock, blues, soul, and funk that calls to mind classic bands of the '60s like Traffic and Cream. Their early albums, like We Are Little Barrie, laid down their template in wall-shaking fashion, while later records like 2011's King of the Waves and 2017's Death Express added surf and pop influences to the mix. By the time of 2020's Quatermass Seven, the band had staked out a place all their own sonically and Cadogan was firmly entrenched on the short list of best guitarists of his era. Formed in Nottingham in 2000 by Cadogan (guitar, vocals), Wayne Fulwood (drums, vocals), and Lewis Wharton (bass), Little Barrie released a handful of singles for small labels like Stark Reality and Showdown before getting signed to Genuine Recordings and beginning work on their first album. Produced by indie pop legend Edwyn Collins (whom Cadogan had met while working in a guitar shop), We Are Little Barrie hit the shelves in February 2005. Recorded over the course of 23 weeks in Collins' studio, working only on Wednesdays due to Collins' busy schedule, the band concocted an album that sounded both meticulously crafted and bashed out. The record, combined with the group's fiery live performances, gave Cadogan a rep as one of the best young guitar slingers on the scene and led to his subbing for Morrissey's guitarist on some live dates and collaborating with Johnny Marr, inspiring Collins to pick up his guitar again. Artemis Records released the album in the U.S. at the end of June 2005. Before the recording of their second album, Fulwood, who had tired of the rock & roll lifestyle, left the band. Sophomore record Stand Your Ground was recorded during 2006 in New York with producer Dan the Automator at the helm and Blues Explosion drummer Russell Simins, and in London with Mike Pelanconi producing and new bandmember Billy Skinner on drums. The album was released in 2007 by PIAS/Wall of Sound. In 2008 Virgil Howe, the son of Yes guitarist Steve Howe, joined on drums. That same year the band ended up backing Paul Weller on parts of his 22 Dreams album and Cadogan joined Primal Scream as a touring guitarist. Cadogan also appeared on Weller's 2010 album, Wake Up the Nation and Edwyn Collins' Losing Sleep. Somehow the trio found time to start working on another album, and they headed back into the studio with Collins again at the helm. The resulting surf music-influenced King of the Waves was released in 2011 on Tummy Touch Records. Cadogan kept working with Primal Scream, appearing on their 2013 album, More Light, while also finding time to play on recordings by Texas, Pete Molinari, and the Chemical Brothers. Little Barrie continued their working relationship with Collins for their fourth studio album, Shadow. It was recorded in North London with engineer Seb Lewsley and released in 2014, once again on Tummy Touch Records. Cadogan stayed busy outside the band, playing guitar for Collins, Primal Scream, and Texas, and in 2015 Little Barrie caught a break when the music director for Breaking Bad called up and asked them to provide the theme song for the Better Call Saul spinoff. The band delivered 30 seconds of happily wonky blues riffing that was instantly welded to the brain of anyone who ever saw the show. Their next release was 2016's "I.5.C.A." single. The self-produced Death Express album followed in mid-2017 on their own Non-Delux label. The band was rocked later in the year by the unexpected passing of Howe at the age of 41. After taking some time off, Cadogan and Wharton decided to keep making music under the Little Barrie name and teamed with Heliocentrics' drummer Malcom Catto to make the Quatermass Seven EP. Recorded at Catto's basement studio on vintage recording gear, the record, which was released on the Madlib Invazion label in late 2020, saw the trio indulging in a looser, more jam-oriented sound. ~ Tim Sendra, Rovi