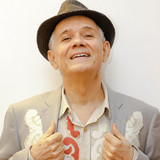 Awarded musician, actor, playwright, and dancer, Antônio Nóbrega has had international acclaim as an erudite creator deeply bent over Brazilian folklore roots. He began his music studies at the Escola de Belas Artes de Recife. In the late '60s he was a member of the Orquestra de Câmara da Paraíba and the Orquestra Sinfônica de Recife, he also gave concerts in his hometown. In the '70s he was invited by folklorist/writer Ariano Suassuna to join the Quinteto Armorial as instrumentalist and composer, which is the most important group to write Brazilian erudite music over popular roots. During that period, Nóbrega traveled abroad and recorded four albums with the Quinteto for label Marcus Pereira. As the group had a strong orientation towards the folklore of the region, they kept intense research and contact with popular musicians and other artists and dancers. Nóbrega also had violin classes with the Catalan professor Luis Soler and voice classes with lyrical singer Arlinda Rocha. In 1976 he presented his own concepts on scenic arts, dance, and music, in his first show, A Bandeira Do Divino, which he directed and enacted in Recife. A Arte Da Cantoria came next, presented in 1982 in São Paulo's I International Theater Festival. Deciding to pursue a career as a creator, he moved to São Paulo and opened Maracatu Misterioso. In that capital, he studied mimicry and, with Klaus Viana, circensian arts. In Campinas, he collaborated in the implantation of UNICAMP's Department for Corporal Arts, where he taught Brazilian dances for five years. After that, Nóbrega turned himself also towards theater, directing and enacting Mateus Presepeiro. In 1989, he created O Reino Do Meio Dia, a solo show devised for the III Carlton Dance Festival, awarded by APCA (São Paulo's Association of Art Critics). "Brincante" and "Segundas Histórias," written together with Bráulio Tavares, followed. With his wife Rosane Nóbrega, he presented several musicals in Brazil and a few abroad: Na Pancada Do Ganzá (awarded by APCA in 1996), Figural, Sol A Pino, Penambuco Falando Para O Mundo, and Madeira Que Cupim Não Rói. In 1994, Nóbrega was awarded with the Prêmio Shell for his contributions to art. Two years later, he was awarded in the same category with the Troféu Mambembe and also received the Prêmio Sharp for "Na Pancada Do Ganzá," as Best Song in the regional category. He was also one of the winners of the I Prêmio Multicultural Estadão de 1997. More recently, he created the Centro Brasileiro de Estudos e Folganças, an organization devoted to further research and practice on Brazilian culture. ~ Alvaro Neder, Rovi