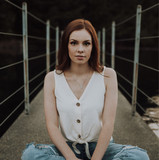 Vancouver-based singer-songwriter Tess Anderson enchants audiences with her candid performances. Open and unapologetic, she invites listeners into her most vulnerable moments through honest and authentic storytelling. Pulling inspiration everywhere from old-school jazz standards to modern pop, her sound is heavily driven by her unmistakable voice.   Growing up in Victoria, BC, her debut into the music industry began at the rookie age of 12. Songwriting as a form of self-expression, she found numerous performance opportunities at a young age. After moving to Vancouver in 2016 to pursue her career further, she received a diploma in audio engineering, music production, and songwriting. Tess went on to sign with indie label BCR in 2019, become a finalist in the 2020 Canadian Songwriter Challenge, receive an Amplify BC Grant for her upcoming project, and build an impressive catalogue of original material.   With 42 live shows in 2019 alone and two single releases, she continues to build a name for herself in the local music scene. Tess's debut EP in collaboration with Ryan Guldemond and Cody Taylor will be released in summer 2021.