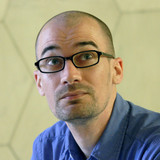 Imagine if the Fleet Foxes went to seminary. Or if Crosby, Stills, Nash, and Young were all one guy. Or if Joe Pug channeled James Taylor instead of Bob Dylan, shaved his head, and started wearing glasses. Imagine if your mild-mannered IT guy could not only recover your lost files, but also capture the pain and promise of human relationships with extraordinary truth and clarity. Matthew Black taught himself to play guitar while listening to the Beatles, Cat Stevens, and 90s monster ballads. The literal son of a preacher man, he moved a lot when he was young, learned to observe the world from the outside looking in, took what he saw and turned it into music. He wrote is first song when he was sixteen and hasn't stopped since. Self-taught, restless, rambling, he has a sound that comes from the roads of Pennsylvania Dutch Country, the streets of Metro Manila, the rattle of a nearly-empty El train, his own fall(s) and redemption(s). Now he lives in Chicago where he performs for crowds large and small, singing intimate songs that tell stories about how this world has broken his heart, and also tell about the hope, love, and mystery that he's found among the pieces. ~Matt Lang