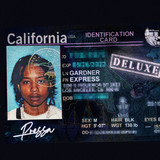 Gardner Express Deluxe coming soon!   Coming to the attention of rap fans by tallying up millions of YouTube views on early tracks like 2016’s “Deadmihana,” Pressa made his mark with the inimitable mix of his street-oriented lyrics, melodic hooks and high-pitched voice. As well as issuing a slew of collaborations alongside everyone from Canadian uber-producer Murda Beatz ("Novacane"), Tory Lanez (“Canada Goose”) to UK hip-hop don Giggs (“Sexy”), Pressa has also been steadily issuing the mixtapes Press Machine, Press a Brick and 2019’s Prestige.   Pressa’s notoriety has been inextricably tied to the Driftwood neighbourhood part of Jane-Finch area in the north west of Toronto where he grew up as youth. Historically stigmatized, the residents of the tightly-knit neighbourhood have remained resilient in the face of structural barriers and compounded social inequalities. Within this context, Pressa listened to Drake and Meek Mill alongside legends like Bob Marly and 2Pac, but it was the loss of his childhood friend Wassi that ultimately spurred him to pick up the mic.   Pressa has recently been spending a good chunk of time in Los Angeles, applying a renewed vigor to his music. Pressa is assertive about what his focus is in the future and is poised to pen a new chapter.