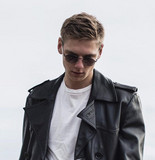 SKVR /skɑː(r)/ is Latvian DJ, award winning music producer, composer, songwriter from Ventspils. His work has been featured on numerous recording, films, TV shows, radio and music streaming platforms. His big break as an artist came in 2018 when single “Lancelot” started to move audiences globally. SKVR remixed Martin Garrix’s “Like I Do”, Fabian Mazur’s “Lighthouse”, Post Malone’s “Congratulations”. In 2019 SKVR collaborated with EXPSR and Katrīna Kreile on the single “In The Air” which was premiered by LR5 and Trap and Bass. Later this year SKVR was nominated for Ventspils award “Melody of the Year” and he also became a laureate of “Creative Work of the Year” award. On 25 September 2019 SKVR delivered an EP album “Upscaled Habits” which includes singles “Fallin For You” from RIGALIVE songwriting camp and “Getaway” featuring Tasteful. In 2020 SKVR directed his first Official Music Video for “Heartbeat” and premiered it on his youtube channel. He produced for Katrīna Kreile’s debut single “Will They Dance Again?” and reached number one on SWH Radio/Fronthouse Artists Chart. SKVR started a project Tumši Sarkana Maģija and released LP album “Miera iela” in his mother tongue. In 2021 SKVR produced Samanta Tīna’s "The Moon Is Rising" for Eurovision Song Contest. Lots of good music coming out soon, so keep your ear to the ground!