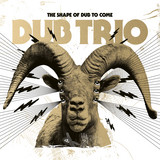 Over nearly two decades together, Brooklyn triumvirate Dub Trio—Stu Brooks [bass], DP Holmes [guitar], and Joe Tomino [drums]—not only delivered a string of albums that forever redefined the term “dub” under cover of metal, punk, alternative, and shoegaze, but also infused its musical prowess into the studio recordings and the shows of genre-bending icons ranging from Mike Patton to Lady Gaga. The three-piece introduced itself on 2004’s “live-dub experiment” Exploring the Dangers Of followed by successors New Heavy [2006], Another Sound Is Dying [2008], and IV [2011]. Conjuring up instrumental music hummable enough to sing, praise came from the likes of Pitchfork who predicted “Dub Trio are on to something.” Along the way, the guys served as Peeping Tom’s live band and toured alongside everyone from Clutch to Gogol Bordello and Dillinger Escape Plan. However, the band took a hiatus as a collective in 2015 after touring heavily behind IV. A two-week 2018 reunion at a tiny Brooklyn rehearsal spot set the stage for their fifth full-length and first release for New Damage Records, The Shape of Dub To Come. Moored by “World of Inconvenience” [feat. King Buzzo], “Fought The Line” [feat. Troy Sanders], “Forget My Name Dub” [feat. Meshell Ndegeocello], they once again usher dub into new territory like only they can.