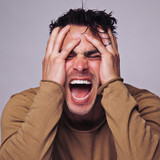 Want me to text you about new music, updates and upcoming shows? Lets connect. Txt me 718-255-9328 Richie Nuzz brings a fresh sense of authenticity and raw emotion to lush pop music. Working with a tight knit group of producers, the NYC native combines elements of RnB, Pop and Hip-Hop, mixed with captivating trombone solos, rich vocals and thought revealing lyrics.    Richie began his career in the entertainment industry as a fashion model. After attending the Fashion Institute of Technology in New York, Richie began appearing in music videos like “Last Friday Night” by Katy Perry and “Work Bitch” by Britney Spears.    Richie’s passion for music eventually drove him to start releasing music and artful videos. He quickly gained attention, opening for acts like Kendrick Lamar, NAS, Jene Aiko, Ryan Leslie and and more.   In 2019 Richie released his single "Bad Habits" which landed over a quarter million streams, followed by his latest single " we used to" ft Heather Sommer and Kunis which recently surpassed over 2 million views/streams on youtube + Spotify. His new track "Keep On Coming" is already making waves and has his fans thirsty for more. He has an arsenal of songs to be released in 2020 and is just getting started.