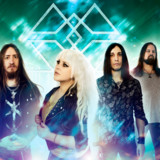 REXORIA is an upcoming melodic metal band from Sweden, that has a great musical mix of heavy, power and folk metal. On October 19 2019 they will release their second album "Ice Breaker". Singles from the album will be released August 23 and October 4. The album has been recorded in Studio Fredman, Gothenburg, and on the album they have the guest artist Niklas Isfeldt from the band Dream Evil.

If you like bands such as Sabaton, Battle Beast, Eluveitie, Hammerfall and Nightwish you should check out REXORIA!