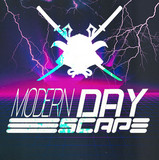 Bred from an era when the post hardcore, emo, and metal core movement was truly starting to take off, Modern Day Escape drew on influences from Taking Back Sunday, Senses Fail, The Used, Avenged Sevenfold and Underoath. As time would go on though the sound would evolve during the production of their LP, Under The Gun and then later the LP, New Life, as new styles and influences from Papa Roach, Atreyu, Adema and Smile Empty Soul were adopted.   Fast forward to today and the Modern Day Escape is back from a hiatus that lasted from 2014 to 2020. With a proper "return to form" the newest releases lean more into the bands original sound but with a heavier twist that doesn’t disappoint and proves that it's never too late to reinvent yourself!   Now heading into 2022 they preparing to return to the studio and write the next chapter and reinvent themselves yet again! Listeners can expect a more modern mix of sounds, spanning the likes of Wage War, Bring Me The Horizon, MOD SUN, Silverstein, Sueco and Beartooth.   Stay tuned for more and welcome to the Rat Pack