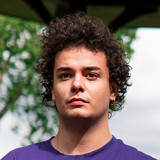 L. Paul started recording music when he stole his mum's voice recorder looking for found sounds around the house. He lived in Barcelona following the strict timetables of an 80-year old woman whilst playing in cafés. He decided to go into producing when he couldn't make the sound of creaking doors and blossoming flowers just with a guitar. He played in bands. He then decided to make pop music. Since then, he has self-released 5 EPs, toured internationally, set up his label-collective. He has become a no-award winning, some-local-press acclaimed songwriter, producer, engineer, and visual artist. He is releasing his first mixtape, Nen & the Flying Fishes, in 2021.