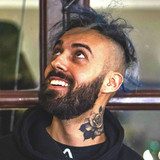 Flaunting an absolute irreverence for distinct dichotomies imposed by genre guidelines and pitchfork critics alike, LUCA LUSH has polarized lovers and loathers alike with his penchant for ADHD levels of meta manipulation. Born Wolgang Robinowitz in the jungles of Micronesia, he was assumed to be an anime gene splicing accident due to his naturally blue hair. He traveled across the globe as an underground youth voice actor before settling in the concrete jungles of Brooklyn where the strong influences of tech house, DIY punk rock, & hentai took root in our hero's heart. Bursting onto the SoundCloud scene of the mid 2010s, Luca made a name for himself deftly avoiding copyright infringement with a discography of flips, edits, and remixes that it is as eclectic as it is electrifying; contributing heavily to a burgeoning collection of internet based artists pushing the frantic and melodic sound that would later become future bass. After getting his shit together and realizing those student loans weren't gonna pay themselves, he hit the club circuit in earnest, earning accolades for his iconoclastic and frantic style of mixing tied together by a turbulent stage presence that echoes hardcore punk sensibilities far more than his bottle service slinging dance music contemporaries. It is rumored that the carpets do indeed match the drapes.