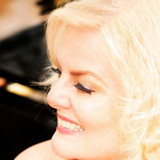 6-Time Juno Award nominee (Canadian Grammy), jazz vocalist/pianist Carol Welsman is the granddaughter of the founder of the Toronto Symphony Orchestra. Music is in her soul. Welsman presents her 13th album entitled Dance with me, marking her foray into Latin jazz. Dance with me is an eclectic collection of international songs arranged with Latin rhythms including salsa, boleros, cha cha cha, Afro Cuban and calypso; all the while keeping within Latin jazz and traditional rhythms. The selections include popular Latin standards adapted into English, Great American Songbook standards, original compositions, a Latin-tinged song penned by Randy Bachman of Bachman Turner Overdrive, and a duet with Multi-Grammy winning Latin superstar, Juan Luis Guerra. This is Carol’s 13th album. Her producer, Oscar Hernández, is a 4-time Grammy winning composer and arranger. Given Oscar’s depth of knowledge of the Latin jazz idiom, Carol commissioned him to arrange all the music for the recording. She is surrounded by a stellar line-up of Latin musicians; Justo Almario on saxophones and flute, Joey de Leon on percussion, Rene Camacho on bass and Jimmy Branly on drums.

The players hail from Colombian, Puerto Rican, Mexican and Cuban ancestry respectively. Juan Luis Guerra sings a duet with Carol on the title song “Dance with me”, which is an English adaptation written by Carol of his song “Si tú no bailas conmigo”