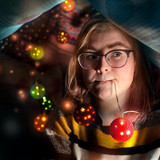 Laura Ryder is a songwriter hailing from the West of Ireland, who is now making music with full band under the title Laura Ryder Ampersand. Laura plays piano, ukulele, guitar and sings. Ampersand consists of Lauren Geary on bass, Shay Sweeney on drums, Josh Meakin on guitar, Aisling Bridgeman on violin,and Matilda O'Mahony & Emily McCormick on backing vocals.  The ensuing music is a mix of everything they get their ears on, taking influence from sources like alternative pop, folk, blues, and jazz.  Laura self-recorded, produced and released her debut EP 'haiku' in her bedroom, in early 2016. She recorded her new album 'Vestigial' with full band in The Meadow Studios. 'Ryder doesn't look to her influences or peers, from my perspective at least. Her music is truly individual as are her vocals, which is so welcome' - Remy's Music Film Blog 'Wonderfully eclectic jazz-ridden explosion of music, fun and bad punnery' - Ken Armstrong