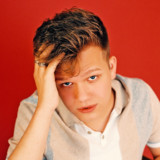 Growing up in the small town of Sanford, NC, Britton worked hard to develop his sound and perfect his art. His parents introduced him to 70s and 80s rock and folk music and Britton immediately found the music he loved. He joined a classic rock band at age 13 and rocked out to Bruce Springsteen, all while penning his own music. Britton says, "I'm a barefoot, peace-loving, rock-singing hippy at heart. I want to keep this old school sound that makes me feel so good and bring it with me into the new school." It’s Britton’s songwriting talent that gave him the opportunity to record with renowned engineer John Davenport, whose credits include Robert Palmer’s “Riptide” and Springsteen’s “Born in the U.S.A” album. It was his jaw-dropping performances on NBC’s “The Voice” that helped Britton gain his fanbase and put the artist in the spotlight. He worked with superstar Alicia Keys and shocked the nation with his amazing covers of songs like Calum Scott’s “Dancing on my Own” and “What’s Love Got to Do With It” by Tina Turner. He finished the show as the season 14 runner-up.Britton loves to perform and wants his music to bring people together. Britton loves to perform and wants his music to bring people together. He’s now riding his wave and releasing new music all throughout 2020. "It's been a long time coming and I'm so proud to finally bring it to you guys," Britton said.