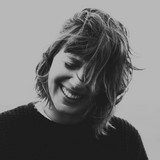 Emma Gatrill is a multi-instrumentalist based in Brighton, UK. Her debut, 2012’s Chapter I, was a poignant collection of songs based around her then-latest acquisition – the harp. Subtly accompanied by various members of the Willkommen Collective, her intricate playing coupled with a unique vocal fragility drew comparisons to Björk and Joni Mitchell as well as her friends and co-conspirators Rachael Dadd and Rozi Plain. Gatrill collaborated widely over the next couple of years, including joining Laura Marling’s band on Glastonbury’s Pyramid stage,

Broken Social Scene on some UK dates and touring with Sons of Noel and Adrian, Matthew And The Atlas and kindred spirit Kristin McClement. Amongst it all, Gatrill somehow found time to develop her own live show; augmenting her harp and vocal with ambient analogue synths and drum machines using foot controllers. Five years and hundreds of live shows later, her live ambitions fed back into the writing and recording process of her second album, Cocoon. The album showcases a huge leap forward in scope and imagination. The harp, tender vocal and unique take on classic songwriting are still at the core, but the arrangements draw from a much wider and often darker sonic palette – introducing vintage monosynths, drum machines and vibraphone. Gatrill’s circle of influences has widened too – from the joyful experimentation of Juana Molina to the intelligent pop and texturally rich arrangements of Julia Holter and My Brightest Diamond.